Home Consciousness Have You Ever Woken Up In The Middle Of The Night Unable... 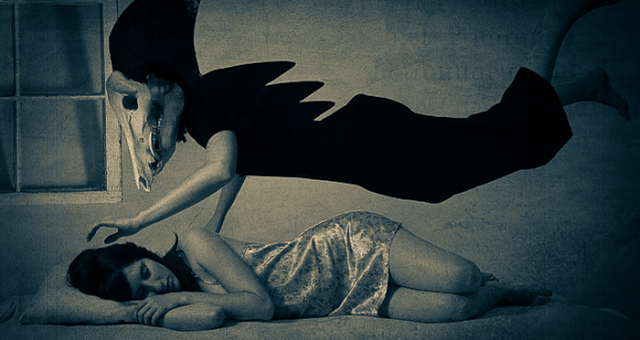 For those who have experienced this eerie phenomenon, no explanation or description is required. They will tell you it is one of the most disturbing experiences they have ever had the displeasure of enduring and feels like you are being attacked and held down by some type of a dark sinister presence. If you haven’t though, imagine the following scenario;

It’s the middle of a peaceful night, and you are sleeping contently. All of a sudden, you awaken abruptly and cannot move, as if being held down but no one is there. You have awareness of what’s going on, but your whole body, from your toes to neck, cannot move.

Breathing normally is difficult because panic strikes. It also feels like there is something pressing on your chest and, in rare cases, people report seeing demonic looking figures.

This might sound like an elaborate hoax or something from a horror film, but it’s actually a very real problem that much of the world’s population struggle with. In fact, as you read this, someone somewhere is dealing with this scary scenario.

So what is it?

These symptoms all stem from an ancient sleep phenomenon known as sleep paralysis.

In 2011, 35 researches studied more than 36,000 individuals. The authors found that an estimate of about 7.6% of the general population experience sleep paralysis, which then increases to 28.3% in high-risk groups, such as students who have irregular sleep patterns. While individuals with conditions such as anxiety and depression, account for the highest population, with 31.9% experiencing these traumatic episodes.

Dr. Daniel Denis, PhD who literally studies this for a living, sums the condition up as follows;

“When you’re experiencing sleep paralysis, you become mindful. The idea is that your mind wakes up but your body doesn’t.”

So why can’t the body move if the brain is awake?

Everything actually relates to the different stages of non-REM sleep (rapid-eye-movement sleep) and one REM state in particular. Although it is possible to actually dream in all phases of sleep, the dreams experienced in REM sleep are more tangible and real. The brain is very active during Rapid Eye Movement sleep, and individuals end up being paralyzed during REM. But here’s the interesting thing, researchers don’t actually know why. Researchers also cannot explain why individuals feel a sinister menacing presence when they are trapped in sleep paralysis. This makes you wonder if what is going on is something else? Unfortunately science is not fool proof. Never has been and never will be. Dr. Denis offers the following theory; “You get up with your amygdala yelling, ‘There’s a danger! So your brain needs to invent something to repair the paradox of the amygdala being active for no factor.” This is one of the biggest problems with science though, they try to explain things that go beyond their knowledge in conventional terms.  My guess is keep an open mind, we don’t really know what is going on.

There are 3 types of hallucinations that can occur during sleep paralysis: “incubus”, “intruder”, and “unusual bodily experiences”.

Here, people feel intense pressure on their chests and they feel they can not breathe, or they have great difficulty doing so. This, however, is in the mind and it seems like we can’t breathe because we are afraid.

The experience of the intruder is when we have what researchers believe to be “hallucinations”. The researchers describe it as a “hypervigilant state of the midbrain,” which makes people overtly sensitive to what’s going on around them.

How can I avoid this nightmarish scenario?

Prevention is very difficult. But those who have anxiety and depression tend to show a greater risk. Being as such, tackle the problem as you would when combating these mental disorders… not with pills or medication, but with healthy alternatives such as exercise, healthy diet, spending time in nature, etc. 7 Amazing Things That Happen When You Start Loving Yourself

Your Monthly Horoscope: May Is Looking Good For You

Deal With The Pain, Not The Symptoms