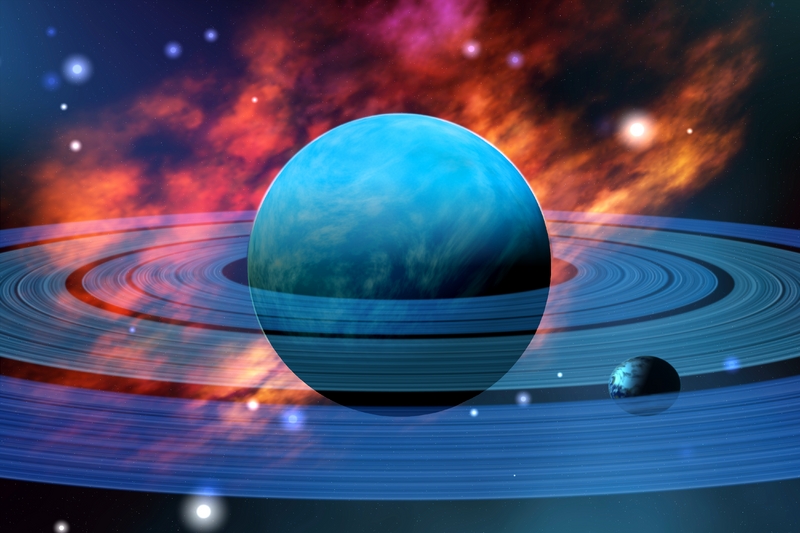 Neptune retrograde 2017 aligns closely with the Moon to make this an especially sensitive time. As well as feeling more emotional and romantic, you may also feel suspicious of others and extremely vulnerable. Any alignment of the Moon with Neptune increases the risk of infection and illness. The stationing of Neptune retrograde is just one more astrological reason that increases this risk of health problems.

Natal Neptune retrograde suggests that some area of life is so painful that you prefer to escape this reality through your own imagined dream world. It is likely that this tendency to avoid pain through illusion is strongly rooted in a tragic past life experience such as torture, where your only option to escape physical pain was to transcend from a physical to a more spiritual plane of existence.

This earlier experience of spiritual pain relief was probably so intense and overwhelming that it became imprinted in your soul memory, in the DNA of every cell in your body. Past life crises like illness, false accusation and victimization will often be repeated to a lesser extent early in your life. You may notice you are the of subject to gossip, scandal or slander.

I associate religious persecution with Neptune retrograde. Throughout history, the Roman Catholic Church alone has accused, tortured, burned, drowned and massacred countless millions of pagans, Protestants, Muslims and many other innocents.

No matter the reasons, you come into this life with some justified fears and anxieties. Although not exactly as real or extreme now, certain experiences will trigger those more painful memories. Your natural reaction is to get rid of the pain by accessing that higher spiritual dimension. The quicker the better and you probably don’t care whether it is through meditation, prayer, your imagination or drugs.

The release of pain relieving hormones in your brain is addictive so you could easily resort to escapism more often and for less critical reasons over time. You may use illness to gain sympathy or to avoid the harsh realities of life. Perhaps you are more subject to confusion and deception than most, or have a tendency to become involved in intrigues and scandals.

False accusation and victimization will exacerbate your fears and anxieties around groups of people or certain people. Other karmic issues associated with Neptune retrograde in your chart could include misdiagnosed or mystery illnesses with the associated blame or guilt; or institutionalization for crime, mental illness or religious mania. Feeling isolated from society is common for many reasons.

Neptune retrograde is likely to play some role in the case of the accuser, inquisitor or torturer. However, I expect that Saturn retrograde guilt and Pluto retrograde misuse of power would play bigger roles in these stories.

Neptune retrograde in transit is a regular cycle lasting 160 days every year during the opposition to the Sun. As with all outer planets, it causes less concern than the rarer inner planet retrogrades. Neptune is retrograde 40% of the time compared to Mars at 9% and Venus at only 7% of the time.

Transiting Neptune retrograde can internalize your fears and anxieties by stripping away the illusions, dreams and false realities that have clouded your vision. The destruction of your fantasy world will show those harsh realities you sought to avoid at some stage in the past. Maybe you have kidded yourself about true love, your financial situation or your career prospects.

A new relationship or a critical event can trigger an old or past life memory of pain. Neptune rules self-sacrifice, victimization, false accusation, scandal and slander. Neptune retrograde can show the source of the pain from which you sought to escape. You may then feel humiliated, betrayed, scared, anxious or guilty.

The internalizing influence of retrograde motion means you may spend more time worrying about yourself and your problems. Self pity, social anxiety or depression could lead to withdrawal and loneliness.

Neptune retrograde is the ideal time for spiritual self-development. Self help books or counselling may help but other tools include meditation, Yoga, Tarot, astrology, swimming and a healthy, toxin free diet.

Phobias, hypochondria and paranoia may become more noticeable during Neptune retrograde but also easier to discuss. The world may seem boring when conspiracy theories are debunked or Armageddon is postponed indefinitely. Sometimes, however, your suspicions may in fact, be based on accurate psychic impressions. In the case of health matters especially, it is worth seeking a second opinion in case of misdiagnosis or misinterpretation of results.

The chart below for the moment that Neptune stations retrograde shows the Moon aligned with Neptune retrograde. The Moon is the strongest influence on Neptune retrograde by far but it’s important to look at other aspects. The possibility health problems coming from Moon conjunct Neptune increases with the quincunx to Jupiter and the major fixed star that joins Neptune and the Moon.

Moon conjunct Neptune increases your emotionally sensitivity. You can sense the thoughts and feelings of others and this can make you feel very uneasy or even ill. You might pick up the wrong signal but it is better for you to be cautious because you are vulnerable to deception and scandal.

Caution is one thing but delusion is another. Dreams can turn into fantasies with a life of their own and suspicion can spiral into paranoia, guilt and such self-destructive habits as drug addiction and eating disorders.

With some conscious self-awareness you can filter out the background noise and use your sensitivity for good. While some psychic impressions may be off the mark, your compassion and empathy are genuine. You can be of great help to the victimized and outcast. The emotional comfort you offer has a healing quality. Romance is possible but remember the difference between fantasy and reality to avoid rejection and embarrassment.

Try to avoid being exposed to poisons or infectious disease. Hygiene and cleanliness is important now because of low immunity. You could be more susceptible to pathogens and the effects if drugs, alcohol and anesthetics.

Jupiter quincunx Neptune will test your faith or belief in someone or something. In order to grow and expand you have to dream and take risks. Now you will find the limits of what is possible in the current conditions. This is a time of give and take. To increase your wealth, prosperity or happiness, you may have put your trust in your own abilities or counted on someone else to come through for you.

You may meet with disappointment, confusion and question your faith. If so you will need to change course or compromise. The sensible thing to do now is to adapt and evolve. The opposite of evolution is extinction and evolution has been the exception throughout history.

The planet Neptune itself rules infections and epidemics, and the quincunx causes health imbalances. The Moon joining Neptune retrograde links possible infectious disease to the public. Confirmation of this illness theme comes through the fixed stars.

Fixed star Achernar at 15°33′ Pisces is a large star so has a strong influence on Neptune retrograde 2017. Robson says Achernar has the same influence as Jupiter this gives success in public office, beneficence, and religion. Ebertin adds that it promises happiness and success by giving good morals, faithful adherence to one’s religious beliefs, or a philosophical inclination.

George and Parker say that Neptune with Achernar weakens the immune system but they offer advice on how to combat this threat of infection as follows:

This configuration causes a disturbance in the immune system affecting all the glands in the body. The native is susceptible to disorders of the entire endocrine system so that diseases can develop almost anywhere in the body. The entire body is weak and they have little energy. These individuals should never take any drugs or medication of any kind as they can pick up almost any disease.

The condition can be helped to a great extent through the consumption of parsley every day at every meal including parsley tea. Parsley vitalizes and strengthens the immune system. Pomegranates are especially favorable for these individuals as well as oranges, especially the portion inside the skin, every other day.

Always Keep These Things To Yourself. People Don’t Need To Know...

June Super New Moon In Cancer: The Collision of Love &...