Unlike many meteor showers, the Draconids are short-lived. In 2021, watch these meteors at nightfall and early evening on October 8. You might catch some on the nights before and after as well. Fortunately, the thin waxing crescent moon sets before nightfall and won’t hinder this year’s Draconid shower. The radiant point for the Draconid meteor shower almost coincides with the head of the constellation Draco the Dragon in the northern sky. That’s why the Draconids are best viewed from the Northern Hemisphere. The Draconid shower is a real oddity, in that the radiant point stands highest in the sky as darkness falls. That means that, unlike many meteor showers, more Draconids are likely to fly in the evening hours than in the morning hours after midnight. This shower is usually a sleeper, producing only a handful of languid meteors per hour in most years. But watch out if the Dragon awakes! In rare instances, fiery Draco has been known to spew forth many hundreds of meteors in a single hour. 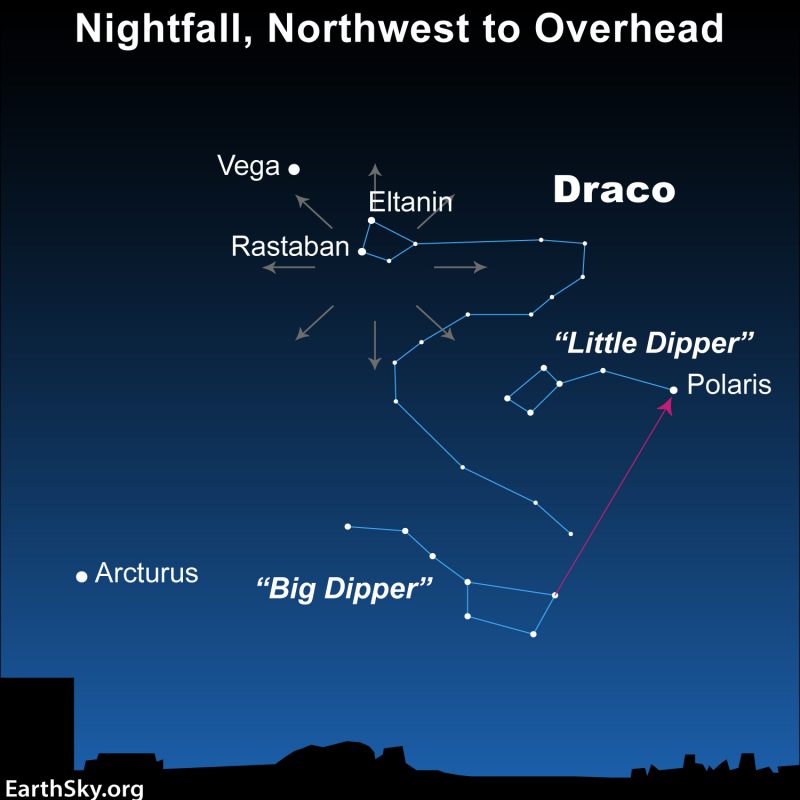 October’s Draconid meteor shower is sometimes called the Giacobinids. This shower produced awesome meteor displays in 1933 and 1946, with thousands of meteors per hour seen in those years. European observers saw over 600 meteors per hour in 2011.

The Draconid shower is active between October 6 and 10. As noted above, the best evening to watch in 2021 is likely October 8. Try the evenings of October 7 and 9 also. Be sure to watch in a dark sky. 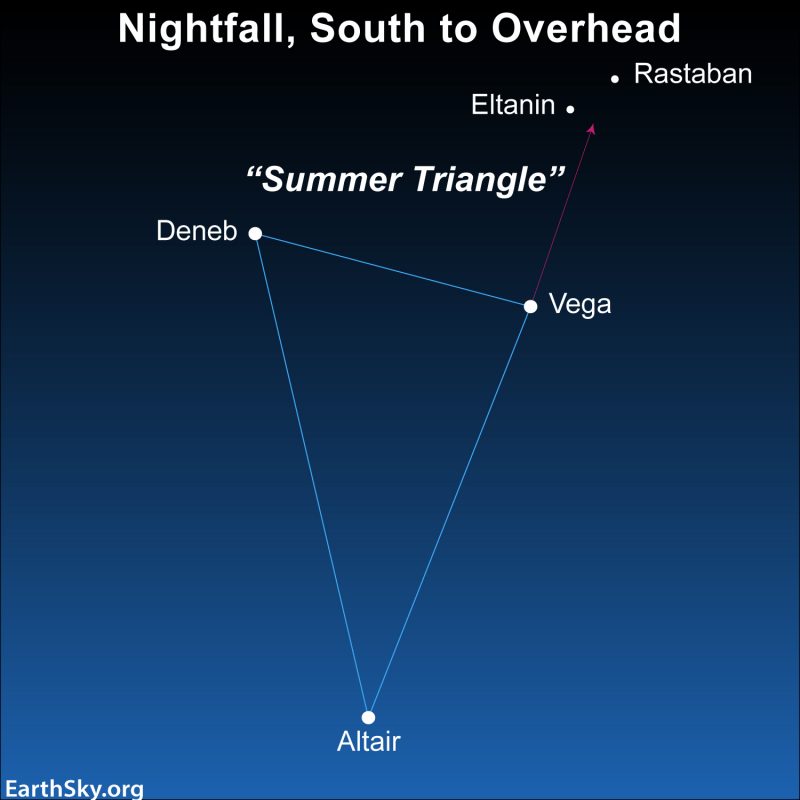 Where is the radiant point of the Draconid shower?

The Draconid meteors, when traced backward, radiate from the head of Draco the Dragon, near the stars Eltanin and Rastaban. See the two charts above.

The Draconids are best in the evening, instead of before dawn, because the winged Dragon, the shower’s radiant point, flies highest in the October sky at nightfall. As night passes – no matter where you are on Earth – the radiant point sinks lower in your sky.

How many Draconids will you see?

In general, the Draconids aren’t a rich shower, unless their parent comet is nearby. They typically produce only about five meteors per hour.

This annual meteor shower happens when Earth in its orbit crosses the orbital path of Comet 21P/Giacobini-Zinner. Debris left behind by this comet collides with the Earth’s upper atmosphere to burn up as Draconid meteors. This comet has an orbital period of about 6.6 years. It’s about six times more distant at its farthest point from the sun than at its nearest point. At aphelion – its most distant point – it’s farther out than the planet Jupiter. At perihelion – its closest point to the sun – it’s about the Earth’s distance from the sun.

On rare occasions – when the peak of the shower coincides with the comet’s perihelion – this shower has been known to rain down hundreds or even thousands of meteors in an hour.

The last perihelion of the comet was September 10, 2018. On that same night, Comet 21P/Giacobini-Zinner came closer to Earth than it had in 72 years. Consequently, the Draconids had an outburst in 2018.

Because this comet has an orbital period of nearly seven years, the next perihelion won’t come until 2025. So we’re not expecting any outburst this year. But, then, no one really knows for sure.

For people who enjoy meteor showers, that’s part of the fun! As a wise person once said, meteor showers are like fishing. You go, and sometimes you catch something.

The Draconids have a rich history

Most meteors in annual showers are named for the constellation from which they appear to radiate, in this case Draco the Dragon.

Draco’s meteors, however, are sometimes called the Giacobinids. That name honors the role this comet played in the history of astronomers’ understanding of meteors.

Michel Giacobini discovered this comet on December 20, 1900. So the comet received his name. Another sighting in 1913 added Zinner to the comet’s name. Thus 21P/Giacobini-Zinner. Astronomers in the early 20th century speculated that meteors and comets were related. So of course they tried to link various comets to the spectacular showers of meteors that sometimes rain down in Earth’s sky.

Comet 21P/Giacobini-Zinner was a particularly tempting object about which to make predictions. Remember, it returns every 6.6 years, and its closest point to the sun is about the same as Earth’s distance.

The Draconid meteor shower produced awesome meteor displays in 1933 and 1946. Observers saw thousands of meteors per hour in those years.

The relationship between 21P/Giacobini-Zinner and its meteors – so studied and discussed among professional astronomers in the early 20th century – probably explains why the Draconid meteor shower sometimes goes by the name Giacobinids.

For a taste of history related to this shower, go to the Astronomy Abstract Service from the Smithsonian and NASA. Find a 1934 article called The Meteors from Giacobini’s Comet by C.C. Wylie. It’s an account of the famed meteor storm of 1933.

Can you see the Draconids from the Southern Hemisphere?

It’s possible. But if you’re so far south that the radiant point in the constellation Draco doesn’t rise above your horizon, or rises only briefly, you won’t catch many.

As seen from the Southern Hemisphere, you would have to be rather close to the equator in order to see Draco’s stars. Suppose you live in northern Australia – say Darwin, Northern Territory, Australia – which is at 12 degrees south latitude. If so, you’d be able to see the stars Rastaban and Eltanin very close to your north-northwest horizon at nightfall in early October (given an unobstructed northern horizon). These stars would set at fairly early evening. And so you wouldn’t see the head of Draco again until nightfall the following evening.

Why early evening? It’s because, no matter where you live worldwide, the head of Draco reaches upper transit (highest point in your sky) at around 5 p.m. local time in early October.

Bottom line: In 2021, the Draconid meteor shower – also called the Giacobinids – will probably produce the most meteors on the evening of October 8/9.

15 Life Changing Lessons To Learn From The ‘Father’ Of...

2019 Numerology: Let Your Creative Side Shine

Love And Hope Will Get You Through The Darkest Of...

Here’s Exactly What You Should Expect From The Upcoming Fall...

What Is A Mind Garden And How Does It Help...

Repeat These 5 Positive Daily Affirmations To Cope With Life’s...

Your Future Generations May Get Affected By Your Childhood Trauma,...

If You Want To Raise Your Home’s Vibration, Give These...

Life After A Spiritual Awakening

August’s New And Full Moons: The...

Ascension Symptoms And The Feeling Of...

To All Healers And Empaths: Warding...