The best way to resolve the ambiguity surrounding death would (hypothetically) be to talk to people who have died. Consequently, there has long been a keen interest in finding a way to communicate with the dead.

One can go all the way back to the First Book of Samuel in the Old Testament where King Saul of the Hebrews persuaded a witch to conjure up the spirit of Samuel, his old mentor, to help him prepare for an upcoming battle. In ancient Greece, a temple known as the “Oracle of the Dead” was built on top of a sacred hill to provide a venue for meetings between those who still dwelled in this world and those who no longer did so.

It was, however, in the 1800s that conversations between the living and the dead became all the rage in formats that we would recognize today. It was during this time that there was a resurgence of Spiritualism, which was essentially the 19th century technology for communicating with the dead. The best way to communicate with the dead was to locate a person who had the power to serve as a middleman between the world of the living and the spirit world, and these individuals came to be known as mediums.

Many mediums appear to have been sincere individuals who genuinely believed that they could communicate with the dead, but most were charlatans looking to make a quick buck from bereaved individuals.

In their séances, 19th century mediums relied heavily on impressive auditory and visual displays such as levitating tables, disembodied voices, and mysterious automatic writing on blank slates. Such spooky theatrical ploys quickly fell by the wayside, however, because they were so easily exposed as fake by skeptics such as the famed magician Harry Houdini.

Contemporary skeptic Joe Nickell has detailed an entertaining example of just how one such trick was exposed by suspicious séance attendees.  During this particular séance, violins were played by spirits in a darkened room while the two mediums were tied up in a cabinet, supposedly unable to fake the event. Unbeknownst to the mediums, however, one of the patrons had smeared printer’s ink on the neck of one of the violins before the séance began. When the lights came on afterward there was ink smeared all over one of the mediums, and I suspect that he ended up with egg on his face as well!

In more recent times, famous mediums such as John Edward and Sylvia Browne serve as direct conduits between the living and the dearly departed without relying on cheesy parlor tricks. In these sessions, the medium asks questions of the patron and reports back information that seems to be coming from the spirit of an individual personally known by the patron. These mediums are masters of what is known as “Cold Reading.” Cold reading is a skill in which the medium deftly poses leading and ambiguous questions while carefully monitoring the body language and verbal responses of the patron. Prompts that go nowhere are ignored while “hits” are pursued in an attempt to draw further information from the person. For live stage performances, mediums may even mingle with the audience ahead of time, engaging in seemingly innocent friendly conversation while picking up useful nuggets of information to be used later to impressive effect.

At the dawn of the 21st century, there was great excitement among those who had long argued that the phenomenon of communicating with the dead was real. Two scientific studies were published by Gary Schwartz (and colleagues) which seemed to demonstrate that mediums can indeed know things about dead people that could not possibly be explained by fraud or statistical coincidence. These studies were published in a professional journal and were the basis of a later book by Schwartz and William Simon about the survival of consciousness after death.

Unfortunately for Spiritualists, however, these studies failed to stand up to the scrutiny of other scientists and they were quickly picked apart on the basis of poor experimental control and biased data interpretation. It probably did not help the scientific reputation of the experiments that they were funded in part by HBO in an attempt to produce an entertaining television documentary. It is still the consensus of the scientific community that no psychics have yet performed acceptably under rigorous laboratory conditions.

There are, of course, ways of communicating with the dead that do not require the services of a medium. 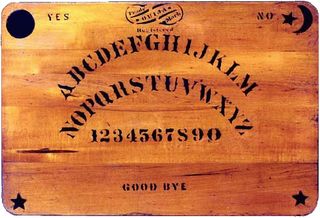 The Ouija Board is a device that evolved from the automatic writing techniques originally developed by mediums. In a now famous 1853 French séance, the participants stuck a pencil through a basket turned upside down. By placing their hands on the basket, the séance attendees were able to see answers to questions spelled out by spirits as the basket moved around on a piece of paper. Over the next 40 years, the device became more sophisticated and went through many permutations until it came to resemble the game board that we recognize today.

It was not until the 1920’s, however, that the Ouija board became widely familiar to the public and it was during this time that it also developed its occult reputation. People soon began to fear that it might become a tool of the devil or other sinister demonic forces. The fact that the Catholic Church apparently took it quite seriously and attempted to crush its popularity only served to confirm its effectiveness in the eyes of true believers.

The most dramatic and direct way of communicating with the dead is to see them or hear them in person.

The Legend Of The Red String Of Faith

October Astro Forecast: What The Spookiest Month Has In Store...

444 Synchronicity Meaning: Why Does 4:44 Keep Appearing Wherever I...

Lunacy And The Full Moon – Does A Full Moon...

If Your Body Is Showing These Warning Signs, You Might...

You Have To Pay Attention To These 5 Sacred Signs...

What Is The Black Gemini New Moon Bringing For Your...

Beer, Swearing And Inner Peace: Rage Yoga Brings It All...

Venus Is Going Out Of Bounds...

This Is How The Powerful Gemini...