In magic, we may use many things. We use our mind, candles, our emotions, the stars, the powers of nature, but quite often we also use the power of our body.

A Mudra, is a Magical Gesture used for symbolic and ritual purposes. The origin of this practice is in Hinduism – as Yoga! Mudras for Magic are very common.

Through these hand gestures, a practitioner can easily attune with Magical Powers, Gods, the elements and so much more. In India, mudras are used along with with pranayama – the mystical-yogic breathing exercises (find here the yogic breathing exercise). They are used to stimulate different parts of the body. Hence, affect the flow of prana in the body. It’s amazing how simple they are and if you practice them enough, you can see outstanding results!

A Mudra, is usually very easy to do with your hands. Therefore, I love to use them while I’m on a bus, while waiting, or generally in any chance I have, while feeling idle. For better results, mudras require peace of mind and meditation. You are going to love them!

We are going to give you Mudras for good health, vitality, prosperity, happiness… but let’s start with our favourites… Here we are going to show you 3 Mudras for Magic, 3 hand gestures which can give you instant magical powers. If you master these gestures you are going to see some outstanding results! Let’s begin…

1. The Garuda Mudra (aka Eagle Mudra) : the Awakening Mudra 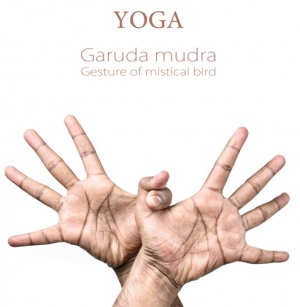 Garuda Mudra can be used for Awakening. It’s a very powerful mudra which when used can elevate prana (the cosmic energy) inside our body and aura. This flow of energy immediately powers up our magic and awakens our natural abilities. It’s the perfect start for many spells and can be used for many other reasons. Let’s see some:

# How to use Garuda Mudra:

Precautions: The Garuda Mudra is believed to elevate blood pressure for a short time. Ask your medical doctor for any advice.

2. The Kubera Mudra: the Mudra of Manifestation

Kubera is semi-divine Yaksha who is considered to be the Lord of Wealth and protector of the North. Kubera is usually depicted with a plump body (usually gods of wealth are depicted ‘chubby’ as a symbol of good and prosperous life) wearing precious jewels, and carrying a money-pot.

The Kubera Mudra, is also called as the ‘Mudra of Money’, or the ‘Mudra of Wealth’. The truth is that this Mudra actually activates our connection with the Astral Plane and balances the Macrocosm with the Microcosm. ‘As above, so below’ the alchemists used to say. It is used to initiate the materialisation of magical work. In others words, we use Kubera Mudra to bring in life whatever we want! No wonder why this Mudra is used in many mind control methods!

# How to use Kubera Mudra:

3. The Lotus Mudra: the Mudra of Light

Lotus has a very interesting symbolism in many ancient civilisations and traditions including India and Egypt. In both traditions, the lotus is a symbol of Light which rises from Chaos and Darkness. It is no wonder why the Lotus flower is used as an element for decorating sacred temples and sites in India and Egypt.

The Lotus Mudra, is used to help us rise from darkness and conjunct with the Holy Light. As the Lotus flower rises up out of the swamp’s mud without a drop of mud on it, so can we rise up and see the light once again, without any trace of darkness, free from negativity.

Banish negativity
Cleanse our Aura
Exorcise vampiric – demonic entities (along with rituals – not just with a mudra)
Banish bad mood – raise our Vibrations (see more here)
Connect with the Divine source – Holy Light
Cleanse and bless objects, animals and peoples (along with rituals)
To charm anyone and anything
For inspiration

# How to use Lotus Mudra:

Listen To What People Feel, Not To What They Say

This 18 Breaths Meditation Will Help You Unlock The Powers...

How To Tell If You Been Gifted With Clairvoyance? Signs...

7 Habits Of Empaths That Make Them Hard To Love

How The Root Chakra Relates To Money Matters, Survival &...

10 Signs That You Are Stuck With A Spiritual Narcissist

How The Intense New Moon in Scorpio Will Affect Your...

Thyself: The Only Worthwhile Investment We Ever Make

5 Super Advantages Of Doing A Walking Meditation Instead Of...

A Rare Black New Moon Is Rising In Leo July...

Signs From Beyond: This Is How...

The Fall Mercury Retrograde Will Be...