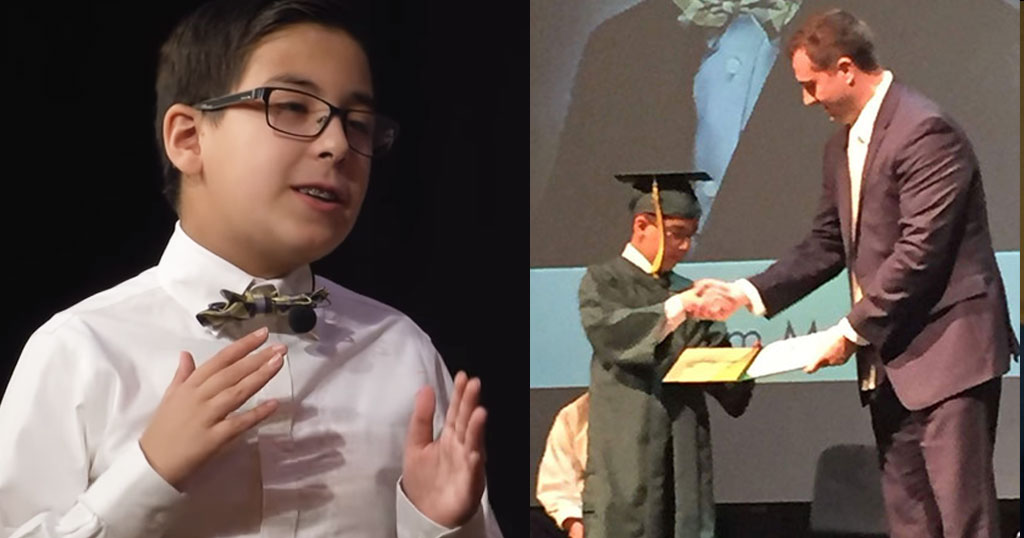 It might sound like a lie, but it’s true: 11-Year-Old William (Vasilios) Maillis is one of the youngest students ever to graduate from a public high school – at the age of nine – and is going to have his associate’s degree from St. Petersburg College, Florida, soon.

While most children in his age focus on playing, William is trying to become an astrophysicist. The boy’s long-term goal is to get a doctorate in astrophysics and prove scientifically that God exists.

The boy from Pensylvania, US, was approved in the University Carnegie Mellon in 2017. According to his father and Greek Orthodox priest, Fr. Peter (Panteleimon) Maillis, William began talking when he was seven months old, while at the age of two he could multiply numbers.

When he became four, he learned algebra, sign language, as well as how to read the Greek language, and, at his five, he read an entire book of Geometry (209 pages) in a night. The next day he was solving complicated math exercises.

On February 22, 2018, the HCHC community had the opportunity to hear William and his father, a graduate of Hellenic College and Holy Cross, converse with Fr. Christopher Metropulos, HCHC President, onstage at the Maliotis Cultural Center. Their conversation was the latest in a series of Presidential Encounters under the theme “Answering the Call” in which, Fr. Christopher explains, “We invite Orthodox Christians who are doing extraordinary things in their lives to share their experiences with us.” Guided by questions by Fr. Christopher and later by audience members, William showed that he is indeed a genius but also a regular child. “I may be more book-smart than most kids my age, but I like a lot of the same things that they do, normal stuff like video games and watching TV,” the boy said.

Little William’s interest in proving the existence of God started when he was about five or six. It has evolved into a complex theory that he hopes one day to confirm.

“Science and theology don’t have to be separate… Scientific knowledge is a gift from God, like everything else. We need to learn more about our faith and about where we are in the universe.” Recounting the parable of the talents, the genius boy added :”We need to invest our talents, our gifts that we have from God, and not just bury them.”

This article (11-Year-Old Genius Son of Greek Orthodox Priest Answers To Hawking: ‘Science And Theology Don’t Have To Be Separate…’) was published by Thinking Humanity and is published here under a Creative Commons license with attribution to thinkinghumanity.com.

Are You Part Of The First Wave That Will Raise The...