Home Consciousness The Other Side Of Crystals: The 9 Deadliest Minerals We’ve Ever Mined
ConsciousnessScience & TechTruth & Mystery

The Other Side Of Crystals: The 9 Deadliest Minerals We’ve Ever Mined

Precious minerals make the modern world go ’round—they’re used in everything from circuit boards to tableware. They’re also some of the most toxic materials known to science, and excavating them has proved so dangerous over the years, some have been phased out of industrial production altogether.

Here are the nine most toxic minerals we’ve ever mined:

Mercury sulphide, more commonly known as Cinnabar, has been our primary source for elemental mercury since the earliest days of human civilization. Mercury has traditionally been used as a pigment for ceramics and tattoos, though in the modern age, it’s been employed in a wide variety of scientific equipment like thermometers and barometers, as well as a number of heavy industrial applications like precious metal reclamation and chlorine production, not to mention the mercury switches that help modern electronics work.

However, when oxidized, this element will produce methyl mercury and dimethyl mercury, two toxic compounds that cause irreparable harm to the nervous systems of children. It is deadly in small concentrations and can be absorbed through the respiratory tract, intestines, or skin. Because of this, nearly all of the industries cited above have either already phased out its use or are in the process of doing so.

Both sulphur and sulphuric acid are both used extensively throughout industry. Sulphur can be found in everything from matches and tires to fungicides and fumigants while sulphuric acid is a vital component of many industrial processes from pigments to explosives. And at one time, Pyrite, a compound mineral formed from iron and sulphur, was the only place to get them.

This lead to extensive pyrite mining efforts, which in turn lead to devastating environmental damage as the sulphide mine tailings acidified groundwater and nearby streams. Plus, pyrite has a nasty habit of spontaneously combusting when it’s mixed into coal seams and exposed to air, releasing highly toxic metals like Arsenic into the atmosphere as it oxidizes. This is why many coal mines will spray limestone powder onto newly excavated coal seams—it slows the ore’s exothermic oxidation reaction enough to prevent it from exploding.

Pyrite is no longer commercially mined—the realization that sulphur can easily be collected as a byproduct of natural gas and oil processing put an end to that. Today it is rarely excavated other than as specimen pieces. This gorgeous green gemstone is called Fluorite. Composed of calcium fluoride, it’s commonly found in veins of other ores like iron, coal, and copper. The stone can be used as a smelting flux, though it’s more often seen in jewelry and the lenses of telescopes. And when mixed with sulphuric acid, fluorite produces hydrogen fluoride, an important industrial chemical precursor.

However, fluorite can be quite dangerous to both those who handle it regularly and those who simply happen to live near a flourite mine. Fluorite contains fluorine, a soluble mineral that readily leaches into groundwater supplies and can be absorbed by the lungs if ground into dust or burned in a coal-fired stove.

Once fluorine is in the body, it causes skeletal fluorosis—a painful disease that weakens bones and damages joints. Many rural communities throughout India, China and the rest of Southeast Asia have been beset by outbreaks of the disease due to people drinking contaminated water, as is the case in India, or inhaling the mineral as a fine particulate, as is the case in China. An estimated 10 million people are thought to be afflicted by it in China’s Guizhou province alone. From optics and electronics to abrasives and fire starters, quartz is both the second most common mineral in the Earth’s crust and the first most widely used mineral by humanity. In fact, its value as a firestarter (quartz produces a long-lived spark when struck against iron) is thought to be the impetus for mankind’s earliest mining activity. Today, piezoelectric quartz crystals are a ubiquitous component in radios and electronic watches.

Just don’t grind it up and inhale it—that is unless you want a case of silicosis. This respiratory disease is characterized by swollen lungs and lymph nodes which makes breathing difficult. Normally, this only occurs after about 20 years or so of exposure, however a subset of those afflicted may see symptoms in as little as 5 to 15 years. And if you grab a big handful of quartz dust and go all Scarface on that pile, you can cause acute silicosis whereupon your lungs will fill with fluid and you will drown in your own juices.

It may also very well just give you lung cancer. Since this disease is closely associated with specific industries like mining, abrasives, and glass manufacturing, OSHA has implemented strict guidelines dictating that workers wear fumigators to limit their silica intake.

Galena is where we get our lead. The Romans loved lead—they used it in everything from pipes and flux to paints and tablewares—and we still rely on it today: lead is often found in batteries and bullets, high energy shielding (such as X-ray blankets and nuclear reactor enclosures), formerly as an additive to paints and gasoline, and as a storage solution for corrosive chemicals. But, come on, it’s lead.

It’s not as bad as mercury, which will kill you immediately outright, but lead doesn’t get flushed out of your system. It accumulates over the years, eventually reaching toxic levels. Once that happens both you and your kids pay the price, as lead toxicity is carcinogenic to you and is teratogenic (causing severe birth defects) to your offspring.

Phenacite is mined both as a gemstone and for its valuable beryllium content. Beryllium was once a precursor for many ceramic materials, until people figured out that inhaling Beryllium dust caused berylliosis—aka chronic beryllium disease. It’s like silicosis but much more severe and also chronic.

You don’t recover from CBD simply by minimizing your berrylium exposure. Once you have it, you have it for life. Basically what happens is the lungs become hyper-sensitive to berrylium, which causes an allergic reaction wherein the lungs from little nodules called granulomas. These granulomas make breathing extremely difficult and can go on to instigate diseases like tuberculosis. 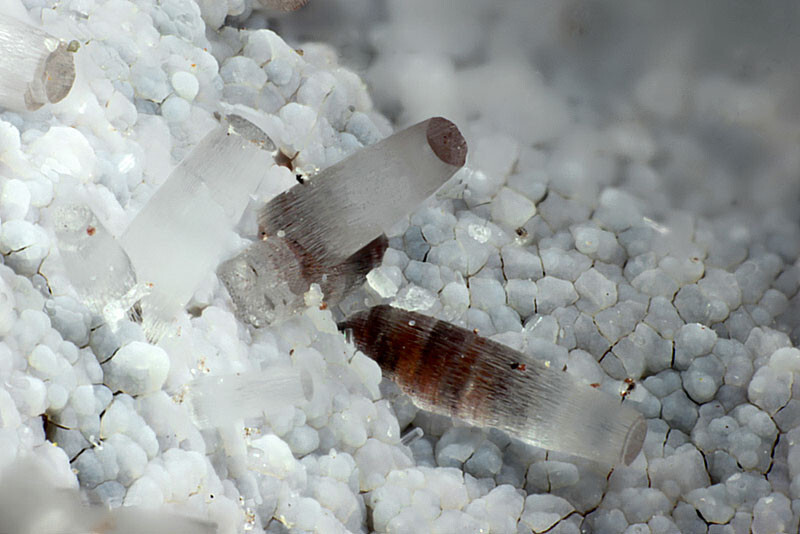 Erionite is a member of the zeolite family, a class of fibrous silicate minerals often referred to as molecular sieves thanks to their handy ability to selectively filter out (through absorption) specific molecules from both the atmosphere and liquids. Often found in volcanic ash, erionite was often used to as a catalyst for doping noble metals used for hydrocarbon cracking and as a fertilizer component.

It looks a lot like asbestos minerals and harms humans much in the same way: mesothelioma. It’s primarily an industry-specific disease—or at least it was, until we realized that it caused super-cancer and stopped mining the stuff in the late 1980s.

The phosphorous in your garden fertilizer and fluoride in your tap water very likely came from a rock like this, called Apatite. These phosphate minerals come in three varieties, each respectively containing elevated levels of OH, F, or Cl ions—the Hydroxyapatite version being a major component of your tooth enamel and the Fluorapatite version constituting what’s dumped into civic water supplies to prevent cavities. And while having strong teeth and bones is a good thing, exposure to Hydroxyapatite (either by mining or processing it) will deposit those same minerals on your heart valves, effectively petrifying them. 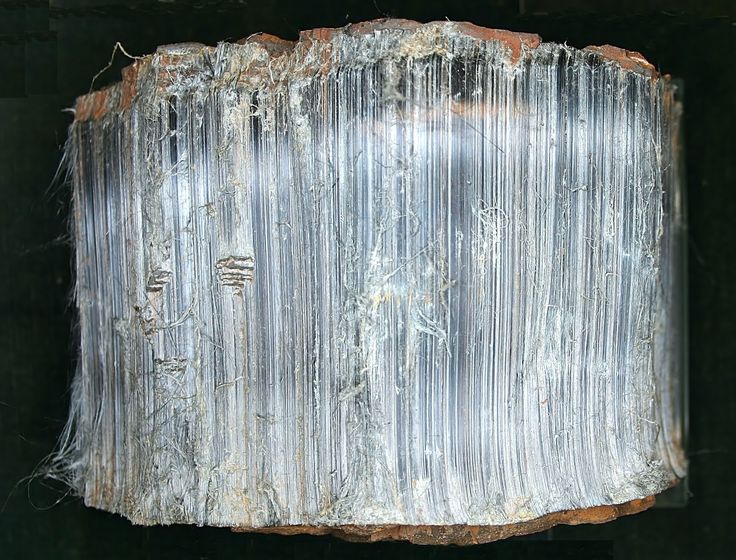 Say hello to the world’s most dangerous material: Crocidolite, better known as blue asbestos. It was once widely used for a variety of commercial and industrial applications thanks to its strong, fire-resistant, and flexible nature—from ceiling tiles and roofing materials to flooring and thermal insulation.

But then, in 1964, Dr Christopher Wagner made the connection between asbestos and mesothelioma and the market for these products disappeared overnight. Unfortunately, cleaning up asbestos-laden buildings throughout the country has taken far longer and continues to this day.

Observing, Pondering And Reflection! In Limbo Or Confused?

5 Differences Between A Soul Mate and A Life Partner;...

July Is An Energy-Packed Moth Bringing A Powerful Shift In...

Your Midlife Crisis Indicates That The Uranus Opposition Is Upon...

Tonight Is The Strongest And Biggest Super Full Moon Of...

8 Strong Comebacks As Effective As F*ck You

How The ‘Lucky’ People Use The Law Of Attraction

I am curious — I collect crystal specimens, design jewelry from crystal beads (I do not cut, grind or polish any stones), and I use crystals for their healing properties. Crystals, including the common ones mentioned in your article, are throughout my home and office on tables, floors and window sills. Do I need to worry about my exposure to these crystals you mentioned, or handling them? I knew about some you mentioned — I did not know about quartz and fluorite being so dangerous. So many people wear jewelry and collect these stones and use them, carry and handle on a daily basis. So is it just the process of the mining that is/was so dangerous, or does inherent risk include the above uses?

4 Signs That Would Be Least...

These Are The Five Real Reasons...

4 Zodiacs That Will Be Most...