Home Parapsychology The 7 Layers Of The Aura 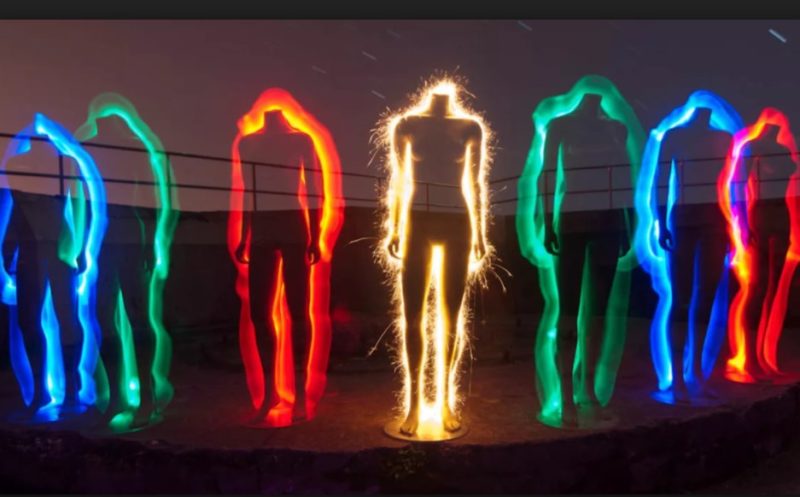 The human aura is described as a hazy bubble of light that surrounds a human being from head to toe. An aura has multiple layers that interact and relay information between the body through its seven chakra energy centers, and the immediate external environment.

Each layer of the aura relates to the physical, mental, emotional and spiritual conditions of an individual. Energetic vibrations of a person’s thoughts, feelings, state of health, awareness, and past experiences are stored in the different aura layers.

Aura layers are also referred to as “auric layers” or “subtle bodies”. There are seven auric layers that are commonly witnessed. The outermost layer of an aura’s energy field extends anywhere from five to seven feet from the physical body, with the range of its extension dependent upon the overall health and well-being of an individual.

For those unable to see auras, when one aura field is interacting with another, it can be intuitively described as having a clear feeling that someone is in the proximity of their “personal space”.The seven layers of the aura are listed and described as follows, and can be referenced in the illustration on the left.

1. The Etheric Layer or Etheric Body

The etheric layer is the first layer of the aura and spans ½ inch to 2 inches from the surface of the skin, outlining the body. This field of energy connects primarily with the first chakra, our organs, glands and meridians, and relates to the condition and health of the physical body.

The second aura layer is called the Emotional Layer and extends two to four inches away from the physical body encircling it in the shape of an oval. This layer is primarily connected to the second chakra, feelings, emotions and experience. It is constantly in a state of change, reflective of our current mood. This layer also stores unsettled emotions such as fear, resentment, and loneliness.

3. The Mental Layer or Mental Body

The third aura layer is the Mental Layer. Its extension is four to eight inches from the physical body. This layer is connected to the third chakra, our consciousness, ideas, logical processes, belief systems and intellect. In this layer, thoughts and ideas are rationalized and validated. Mental health and mental issues present themselves in this aura layer.

The fourth layer of the aura is referred to in short as either the Astral Layer or Bridge Layer. It is eight to twelve inches away from the physical body and connects to the fourth chakra, our sense of love, well-being, expansion and life-balance.

The fifth aura layer is the Etheric Template Layer. It is one to two feet away from the physical body. It connects with the fifth chakra, sound, vibration, communication and creativity. Primarily this layer of the aura serves as a carbon copy of the physical body on the spiritual plane.

The etheric template layer is the seat of our higher consciousness and higher will. Vibrations from the physical plane and the spiritual plane communicate here, thus manifesting thoughts into substance, and creating paths for all possibilities.

The sixth aura layer is called the Celestial Layer. It extends two to three feet away from the body and reflects our subconscious mind. It is where the physical mind comes to connection with the spiritual mind through meditation and devotional practices.

It is connected with the sixth chakra, memories, dreams, spiritual awareness, intuitive knowledge, trust, honesty, and unconditional love. The Celestial Layer holds our experiences of having a connection to something greater than ourselves.

The seventh aura layer is known as the Ketheric Template Layer or Causal Layer. It is connected to the seventh chakra, all knowledge and all possibilities. This layer protects and holds all other aura layers together, and contains the blueprint of our spiritual path, reflecting all of the soul’s experiences and events through time.

The Ketheric Layer is the link to “God”, “Creator”, “Source”, or “All That Is” within each individual, and extends three to five feet away from the physical body, depending on our spiritual state. Spiritual Meaning Of The Labyrinth. Stepping Into The Unknown

Are You The Parent Of A Superhuman Indigo Child?