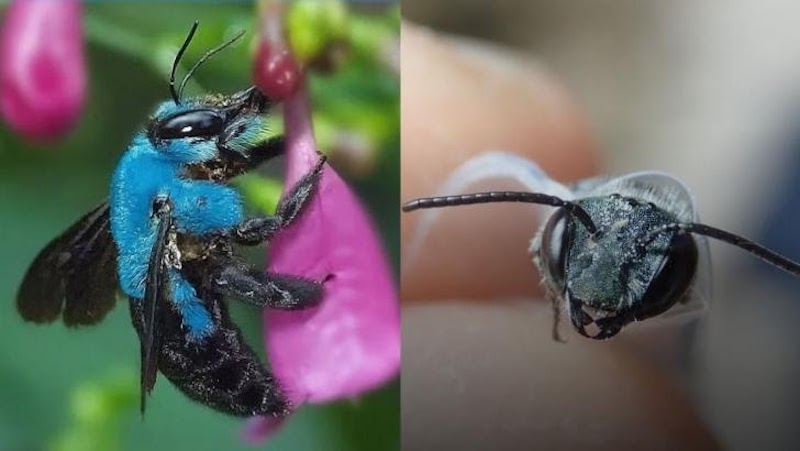 Researchers say that the rediscovery of this rare blue bee can possibly save the species. Osmia calaminthae, the scientific name for this rare species, was first found in 2011.

They feed on an endangered deciduous shrub that is local to Florida, called Ashe’s Calamint. This rare blue bee is said to be solitary in nature as they nest alone.

The blue Calamintha was rediscovered in central Florida at Lake Wales Ridge, a biodiversity hub, by Dr. Chase Kimmel on March 9th.

Florida Museum of Natural History has organized in-depth two-year research to assess the population and distribution status of the rare blue bee, along with finding out its feeding and nesting habits.

What researchers know is that the rare blue bee is local to Florida and feeds only in Ashe’s calamint pollen.

While experts think that the species is in dire need of conservation, this rare blue bee is not categorized as endangered or threatened yet.

If you live near the Lake Wales Ridge in Florida, consider adding an Ashe's Calamint to your landscaping. https://t.co/YghLmnmK3T #SaveTheBees pic.twitter.com/ftC8CORom0

Back in 2015, some activists petitioned for this rare blue bee to be put on the list of endangered species but were unsuccessful due to the lack of data.

Dr. Kimmel, a postdoctoral researcher, and Jared Daniels, his advisor, have been conducting their study at the Florida Museum of Natural History in hopes to discover more about the rare blue bee species.

In a report to Weather.com, Kimmel said that he has not been successful in spotting another specimen of this rare species since early March. He claimed the reason for this could be because of the premature end of spring this year.

Dr. Kimmel and Daniels said that they hoped to conduct their study amidst the global pandemic and continue observing the rare blue bee well into next year.

Kimmel further added that rediscovery is a good sign and that this time they can ensure their conservation. A Message To All good People Out There: You’re Not Depressed...

Tips On How To Remember Your Past Lives

People Who Push Us To Grow Are The Ones We Fall...