HINDUISM IS REPLETED WITH SYMBOLISM

No religion is so replete with symbols as this ancient religion. And all Hindus are touched by this all-pervasive symbolism all through the life in some way or the other.

EVERY SYMBOL HAS A DEEPER MEANING

Basic Hindu symbolism is enunciated in the Dharmashastras, but much of it developed with the evolution of his unique ‘way of life’.

On the surface, many Hindu symbols may seem to be absurd or even dumb, but discovering the deeper meaning of the symbolism is sheer joy! 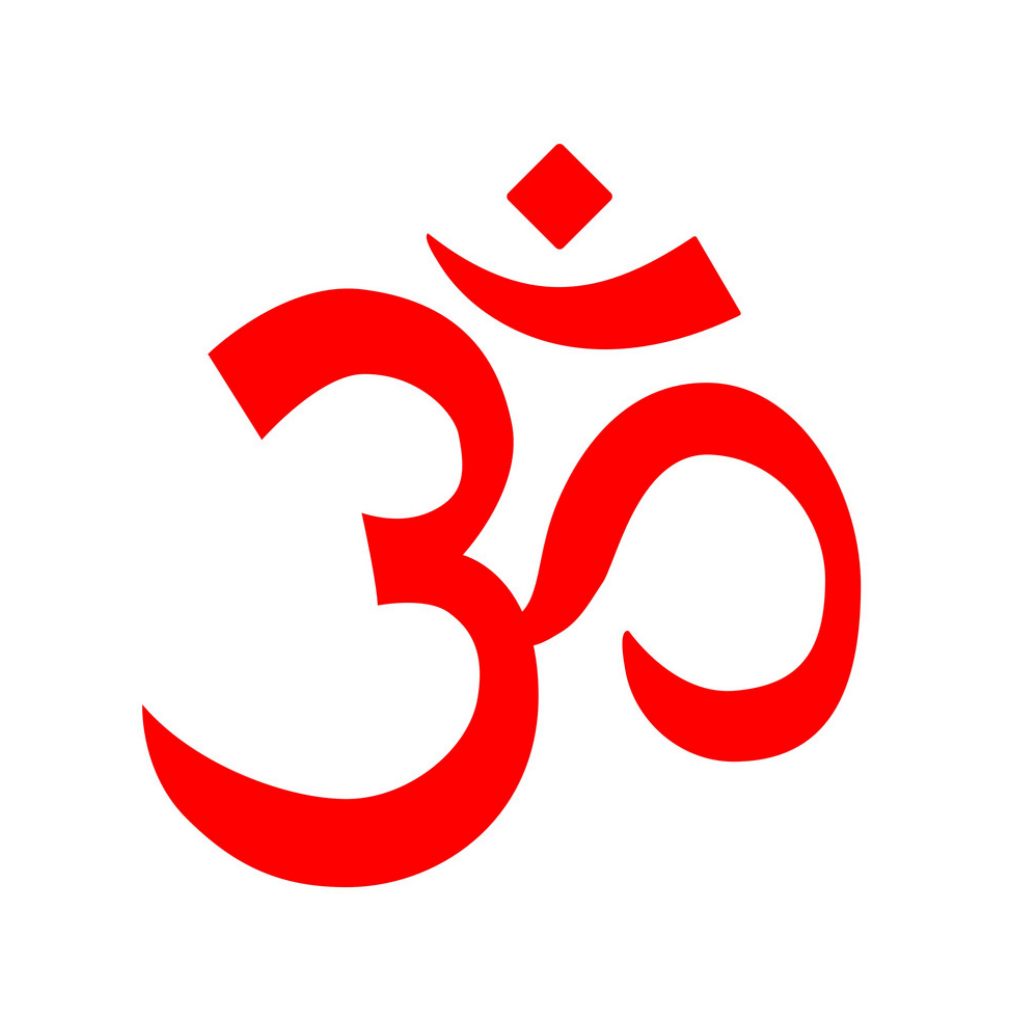 Just as the sound of Om represents the four states of Brahman, the symbol Om written in Sanskrit also represents everything. The material world of the waking state is symbolized by the large lower curve. The deep sleep state is represented by the upper left curve. The dream state, lying between the waking state below and the deep sleep state above, emanates from the confluence of the two.

The point and semicircle are separate from the rest and rule the whole. The point represents the turiya state of absolute consciousness. The open semicircle is symbolic of the infinite and the fact that the meaning of the point cannot be grasped if one limits oneself to finite thinking.

The swastika has an evil association in the twentieth century, but it has a long, rich positive history, for the meaning of the word svastika in Sanskrit means “good fortune” or “wellbeing.”

Swastikas were the symbol of the supreme God in ancient, Southeast Asia and were used by Native Americans as a sign for good luck. Buddha’s (c. 563–c. 483 B.C.E.) footprints were said to leave impressions in the shape of swastikas. To Central Americans long before contact with Europeans, the swastika represented good luck, long life, and prosperity. 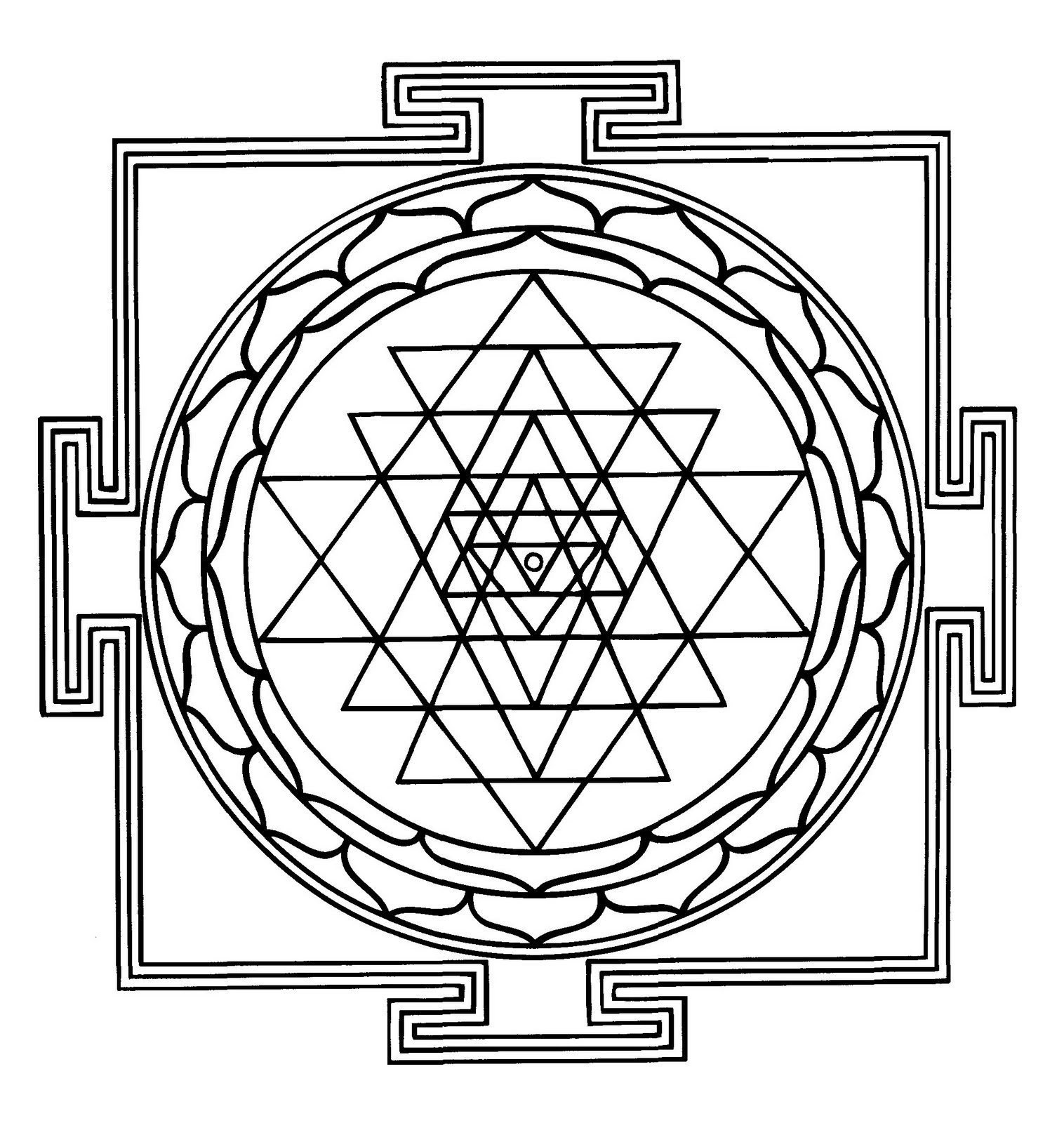 Sri Yantra is a powerful positive energy symbol. Sri Yantra is known to usher in peace, prosperity, harmony and good fortune. Sri Yantra is one of the auspicious, important and powerful Yantra which gives the maximum benefit for almost everybody.

Since ages mystics and gurus have always known about the powers of triangular formulations like pyramids and stars. The Sri Yantra in the 3 dimensional form is a multi pyramid triangular grid signifying unlimited abundance and positive powers.

Tilak indicates the point at which the spiritual eye opens. Lord Siva has a third eye at the Brumadhya. When he opens the third eye, the three worlds are destroyed. Rudraksha is considered to be the most potent manifestation of the Cosmic Force. Hence Rudraksha is the object of veneration and also the source to reach the higher self.

These beads are the seeds of the Rudraksha fruit obtained from Rudraksha trees. Throughout many cultures over time, the lotus has been a powerful image and a spiritual symbol. In Hindu, Buddhist and Egyptian religions, the lotus is considered a sacred flower. Among its many meanings and significance, the lotus is a symbol of “spontaneous” generation, and so it also represents divine birth, spiritual development and creation itself.

The bud of the lotus symbolizes potential, specifically of a spiritual nature. Because the lotus rises from unclean water to blossom as a pure, uncontaminated flower, it is a symbol of purity and resurrection. The black wax in which the frets are set is supposedly the illusion that human beings endure. The dragon itself symbolizes the triumph over evil and courage. The pegs or the birudais are the symbol of mind that controls everything. 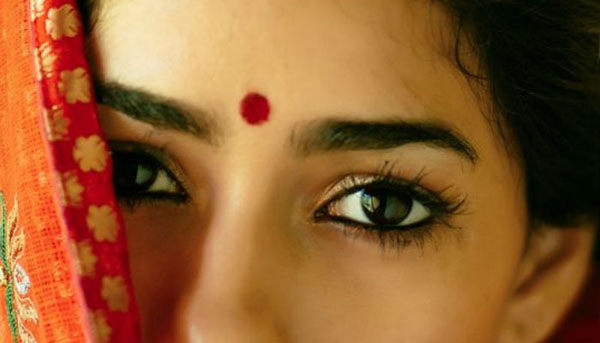 Traditionally, the bindi is worn on the forehead of married Hindu women. It symbolizes female energy and is believed to protect women and their husbands. Bindis are traditionally a simple mark made with the paste of colored sandalwood, sindoor or turmeric.

The bindi is most commonly a red dot made with vermilion. In addition, the bindi is a way of accentuating the third eye, the area between the eyebrows where attention is focused during meditation. In the Rig Veda, Ultimate Reality is referred to as “the One.” In the Purushasukta, it is “Purusha,” and in the Upanishads it is called “Brahman,” “the One,” and several other names. Most modern Hindus refer to the Ultimate Reality as Brahman.

The Upanishads describe Brahman as “the eternal, conscious, irreducible, infinite, omnipresent, spiritual source of the universe of finiteness and change.” {2} Brahman is the source of all things and is in all things; it is the Self (atman) of all living beings. 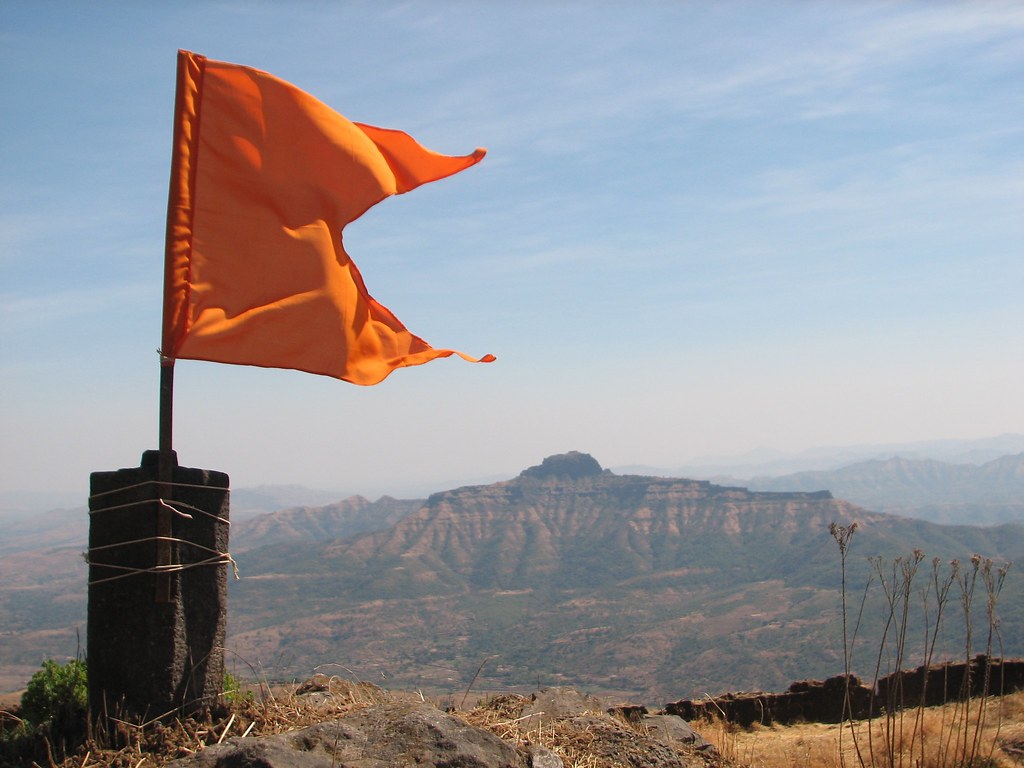 Dhvaja, or ‘flag,’ is the orange or red banner flown above temples, at festivals and in processions.

It is a symbol of victory, signal to all that “Sanatana Dharma shall prevail.” Its color betokens the sun’s life-giving glow. Trishula or the Trident is a prominent Hindu symbol that is associated with Lord Shiva. Though this three-pronged symbol is usually viewed as a weapon used by the Lord for the protection and restoration of Dharma, it actually carries deeper meanings.

It is representative of the Trinity of Brahma, Vishnu and Mahesh and stands for the balance between the forces of creation, preservation and destruction. It is also considered symbolic of the three Gunas – Rajas, Tamas and Sattva. The Tripundra is a prominent Hindu symbol that is used by Shaivites or the devotees of Lord Shiva. Tripundra is typically a tilak, with three horizontal lines made from bhasma or sacred ash applied on the forehead.

It may have a red dot or bindu superimposed in the center. Some Shiva followers also draw the three ash strips of Tripundra on the sides of their arms. If there is any color that can symbolize all aspects of Hinduism, it’s saffron – the color of Agni or fire, which reflects the Supreme Being. As such, the fire altar is regarded as a distinct symbol of ancient Vedic rites.

The saffron color, also auspicious to the Sikhs, the Buddhists and the Jains, seems to have obtained religious significance much before these religious came into being. The lotus flower represents peaceful rebirth which can be a change of ideas and a renaissance of beliefs or the ability to see past wrongs. 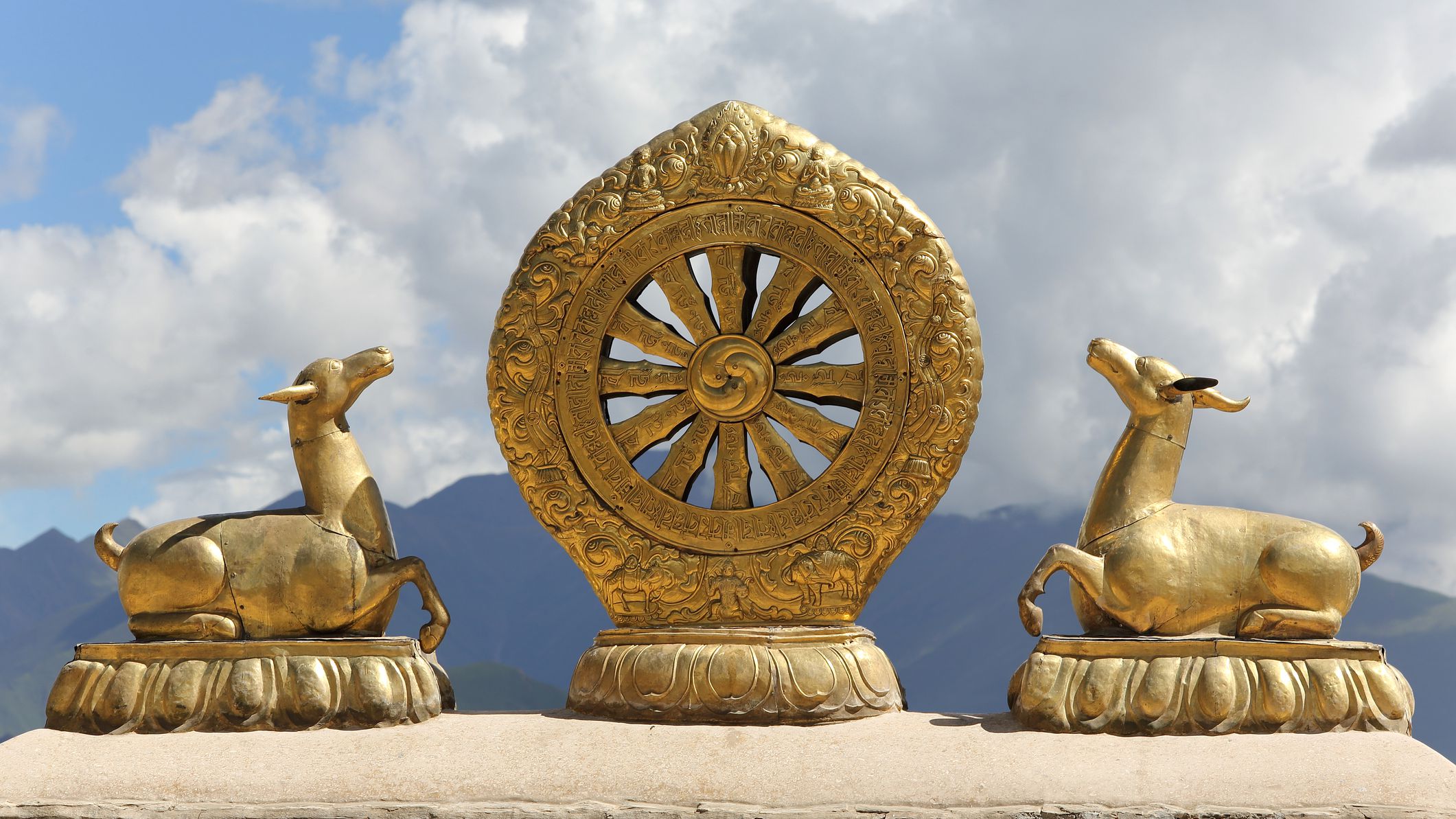 The 8-fold path to enlightenment in the Buddhist tradition is represented by this wheel. 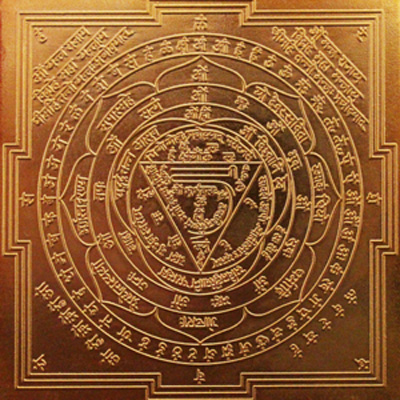 This symbol represents the illumined mind and far-sighted wisdom. THE words and sounds of the Gayatri Mantra comprise the most powerful of Vedic affirmations. Using this symbol removes the possibility of making wrong choices in life by empowering all truth.

When used on water, it carries the harmonic resonance of the wisdom of all life. On a larger, universal scale, the use of the Gayatri Mantra and the sacred symbol, the Gayatri Yantra, representing those enlightened sounds, radiates vast and powerful knowledge to all beings.

You Have The Ability To Communicate With The Spiritual Realm, This Is How To Do It

7 Eye-Opening Signs That You Are Dating An Emotional Psychopath

Don’t Believe In Destiny?! THIS Is The MIND-BLOWING Chain Of...

Here’s What You Should Know About The Past Lives Of...

Today, A Powerful Summer Solstice Is Taking Place: Keep Your...

This Is Why The Strongest Girls Feel Insecure All The...

7 Signs That You Are Being Gaslighted, And You Don’t...

Things To Do And Avoid Under...

How Spring Mercury Retrograde Will Affect...