A Rare Pair: December’s Full Moon In Cancer Coincides With The Winter Solstice

Since 1793, when the Almanac began tracking heavenly events and seasonal changes, the Moon has been full on the winter solstice just ten times in the Northern Hemisphere. So when will this phenomenon next occur? And how rare is it?

WHEN IS THE NEXT WINTER SOLSTICE FULL MOON?

That being said, to the average backyard stargazer, the Moon will be full enough to provide a wonderful show on the 21st, so do keep an eye on the sky that night! If the solstice night is calm and cloudless, with the full Moon beaming down on a blanket of snow, it will be irresistibly attractive, and electrical illumination—even your car’s headlights—may seem unnecessary.

HOW RARE IS A FULL MOON ON THE WINTER SOLSTICE?

The rarity of a solstitial full Moon—the average interval is about 19 years—reinforces the Moon’s role as a beacon playing on human history. Although our research could not find a correlation between these lunar events and significant historical happenings on similar dates in the past, the combination of astronomical forces certainly affect the tides.

As astronomer Bob Berman explains, during this time of proxigean tides [unusually high tides due to the Moon’s phase and proximity to Earth], coastal flooding could occur if there is one more little extra effect, such as a storm at sea, on-shore winds, or low barometric pressure. 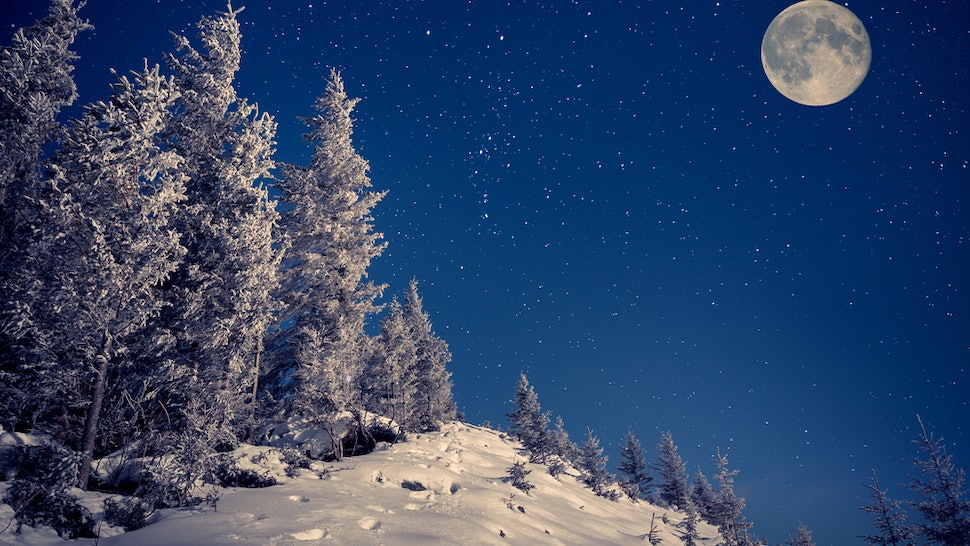 The December 22nd Full Moon essentially marks the shortest day and a major turning point in the year. The Full Moon is an ending or result but 0 degrees is a beginning. This lunation will embody the extra power of this solstice – the point where things are as dark as they can be and the corresponding climb towards longer days.

The Winter Solstice is a time to acknowledge (but not remain stuck in) the past, traditions and structures (Capricorn). Capricorn is the sign of patient ambition – the long, slow climb towards achievement, which we can see reflected in the climb towards longer days.

But the Moon itself is in Cancer, so the theme here will be how external definitions of success are reflected in your inner life – how or if your needs are being met. How you look out for your needs. How you climb towards new definitions of security and safety that work for you.

What’s ending and starting now will take work (Capricorn) – yes, it takes work to truly align yourself with what you need (Cancer). It’s not easy to tune into this stuff, past all the layers/programming from the past and society’s rules.

This Moon makes no aspects to any planets so its energy is quite pure and the resulting emotions (Cancer) will be at a peak. Be prepared for major moods and nostalgia. Pay attention to what you feel– if you feel it, it’s valid (don’t let others tell you you’re being too…whatever).

The Cancer/Capricorn axis is lit up along with the themes of child/parent, mother/father, neediness/authority. Parental/family themes are very strong, which is appropriate during the holidays. Count on at least one domestic turning point or conclusion.

Note that the transiting North Node (ruled by the Moon) is currently in Cancer and the transiting South Node is in Capricorn. While not conjoining this lunation, the path from past (South Node) to future (North Node) is illuminated by this Full Moon – stepping away from outdated definitions of security and looking at what really matters, in your gut and heart.

Could this approaching New Year be the one where you honor your needs, look after yourself or deal with parent/child issues? What inheritances are you stepping away from?

Tree Of Life Meaning: 5 Ancient Interpretations Of The Powerful Symbol

Haven’t Figured Your Life Path Yet? Here Are 4 Ways...

Weekly Horoscope June 10th-16th: How The Nearness Of Jupiter Will...

Do You Believe That Your Child Is A Natural Born...

It Is Possible To Reverse Karma!

Inviting Love Back Into You Life

April 2020 Might Bring Quite A Few Challenges For These...

Compare Your Dreams To The 6...

5 Common Myths About Being An...